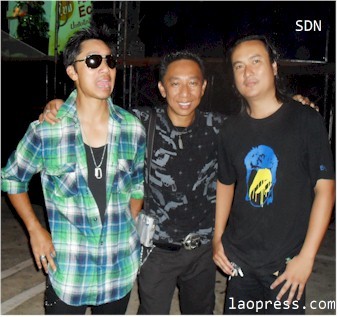 This is Noy’s second solo album.   Every track is a standout.  He captures the romance, passion and the meaning of Lao in his songs.  He has this ability to articulate through songs.  He is such a great artist, a wonderful songwriter and a very sincere person.

The Great Distance is such a good pop/rock album.  It’s artful of everything.  From folk rock to modern pop/rock, drum machines to acoustic guitars.  The voice, the full force of his music, energy and power.

The lyrics on this album are written by Noy and Friends from the Blackflame.  They are stories of their lives.

We are delighted to announce that Noy Sydanon has chosen LaoPress & Entertainment (laopress.com) to be the main distributor of his latest album in Australia and Asia.  We are delighted!!!!

Noy Sydanon will fly out to Australia to launch the album, The Great Distance.  We will keep you inform.  At this stage it appears to be some times in July.

He has been a phenomenon in Australia.  So watch out from the great distance for his BIG ONE!

LAOPRESS: how long have you been making music?

NOY SYDANON:I WAS LACKING EVERYTIME I GO AND PLAY WITH THE BAND; WE Played Country, LUMS AND ALL.  I needed change.

WHEN I WAS A KID I LEARN SONGS NOTE BY NOTE. NOW I NOTICE that I JUST PLAY WHATEVER come to my mind.

LAOPRESS: You’ve released two albums and words and music are excellent, do you write your own music?

NOY SYDANON: YES I DO WRITE MY OWN MUSIC.

LAOPRESS: where does the inspiration to write music come from?

LAOPRESS: How do you describe your music?

NOY SYDANON: ROCK / POP. A LITTLE IN BETWEEN HUH, I LIKE to PUT IN A FEW GOOD BEATS, LITTLE BIT OF GUITAR HERE AND THERE. I TRY NOT TO OVER DO IT. I KNOW OUR LISTENER LIKE SONG THAT IS MORE Pleasant TO LISTEN TO. But for me, I LIKE A LITTLE MORE of power and Energy.

LAOPRESS: What have been your favourite songs?

NOY SYDANON: SO BAD SO GOOD. I LIKE THAT ONE, IF ANYONE DARES TO BE BAD…THEN WELL, MAYBE, IT’S GOOD THING. HEHE WHAT YOU GOT TO LOOSE RIGHT?

LAOPRESS: Song, which best sum you up?

NOY SYDANON:  CHAMPA VIENTIANe, WELL IT DOES NOT SUM up ME, BUT SONGS LIKE KAW PEN LAO, KAW SA BARN AND PARB LUANG TA (FROM THE FIRST CD) DESCRIBE ME THE MOST. I CARE DEEPLY FOR OUR PEOPLE, OUR CULTURE AND our Innocence. AS LITTLE AS I HAVE and I AM TRYING TO GIVE BACK AS MUCH AS I CAN. IF WHAT EVER I AM SAYING IN MY SONGS MAKE ANY Differences TO SOMEONE OR SOMETHING then I’m HAPPY WITH THAT.

LAOPRESS: What are you working on now?

NOY SYDANON: 3RD ALBUM. I’m trying NEW WAY OF WRITING NEW SOUND. IT’S TOO SOON TO tell WHEN IT WILL HIT THE SHELF.

LAOPRESS:  Tell us about IT?

NOY SYDANON: SO FAR THE SOUND IS A LOT BIGGER AND THE BEAT, It’s MORE STABLE AND Tighter, LOTS OF PUNCH AND POWER. I AM KEEPING MY FINGER CROSS.

LAOPRESS: How do you compare third album to your two previous albums?

NOY SYDANON: IF I DONT BREAK IT IN THIS UP COMING ALBUM, I’m surE that I WILL STICK WITH MY DAY JOB. LOL…

LAOPRESS:  what are the highlights for Noy so far?

NOY SYDANON: I AM LOOKING FORWARD TO DO A SHOW IN THE LAND DOWN UNDER THIS AUGUST, I LIKE MEETING NEW FACES, THIS COULD BE THE HIGHLIGHT. FOR THOSE OF YOU who is LIVING IN THE SYDNEY AREA I LIKE TO TAKE THIS opportunity TO INVITE YOU TO COME UP AND SUPPORT LAO MUSIC.

LAOPRESS: Where was your first gig?

NOY SYDANON: TUCSON ARIZONA (USA) WHERE I WAS RAISED. 1983 FOR LAO TEMPLE FUNDRAISING. OH YEAh it was sold OUT. WHAT’S NEW? JUST KIDDING.

LAOPRESS: where can we see you next play?

NOY SYDANON: SO FAR I AM PREPARING TO JAM OUT IN THE LOCAL AREA AND YES SYDNEY AUSTRALIA AUG 30TH.

LAOPRESS: who would you like to play with live?

NOY SYDANON: I WOULD LIKE TO GET TOGETHER WITH LAO MusiciaNS FROM LAOs, NO POLITICS NO BS, JUST PLAIN FUN.  SITIPORN, PARN, ALEXANDRA, ALSO JOY & Mike…I THINK IT COULD BE A BLAST.

LAOPRESS: what are your thoughts on music being downloaded from the Internet?

NOY SYDANON: SOME SAMPLES ARE HARMLESS, BUT TO MAKE IT A FULL ACCESS I THINK WE’RE LIMITING OUR HOME GROWN TALENTS.  JUST LIKE ANYTHING Else, NO oNE LIKE TO RISK THING IF FOR SURE NOT THINGS COMES FROM IT.

LAOPRESS: How do you feel being sex symbol?

NOY SYDANON: OH STOP IT..LOL.. I AM TOO SKANKIE TO BE ONE. THANKS LAOPRESS FOR SUPPORTING ME.